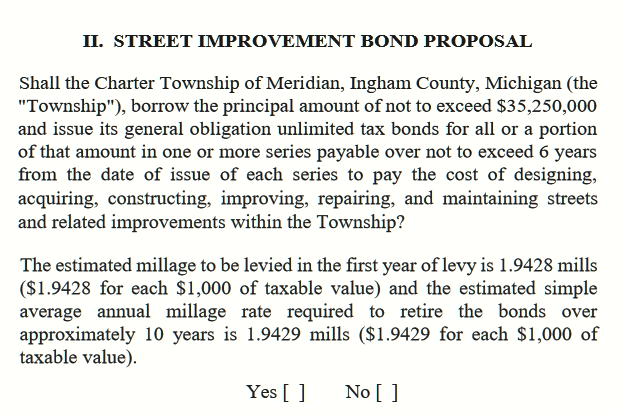 If you go to the website https://clerk.ingham.org/Department/County%20Clerk/Elections/Election%20Results/August%202019%20Proposal%20Language.pdf
through the link at https://fixmeridianroads.com/the-solution to read the sample ballot language, it states the millage will be for 1.9428, which by my math equals $194.28 on a $200,000.00 home.

I’ve used a calculator to triple check my math. What am I missing?

In response to Eliot Singer’s most recent post –a small group of activists looked into creating “Spartan City” out of the shallow hull of the city that would formerly be known as East Lansing.  It could be done, but there is one rather large complicating factor: Abbot Road forms the dividing line between two underlying Townships (Lansing Twp. to the west, and Meridian to the east).

So, in order to create “Spartan City,” the voters both east and west of Abbot would have to … Read more →

I am very curious about why certain non-city taxes are so much higher in EL/Ingham County than in TC/Traverse Bay/Grand Traverse. I have analyzed why EL city taxes are so high—the disproportionate cost of policing a college town with much smaller tax base than Ann Arbor, with collateral effect on legacy costs, which are mostly for public safety, and the huge amount of money squandered on building public works, without seeking voter approved debt millages, and pursuing public-private development with snake oil finance.

Thank you for subscribing to Public Response! Please check your email for confirmation.